Our Team At Your Service

Luis da Silva was born in 1987 to a poor family in Portugal. The family eventually moved to France to seek a better life, where his father began working in construction and his mother worked as a house cleaner. Luis’s parents worked hard to give him and his siblings better opportunities in life, and his good grades allowed him to study in some of the best schools in France. As he grew up, Luis studied business, traveled through several countries, and learned 5 languages.

Luis began his career working in international business, with import/export.  But soon he met the love of his life and decided to move with him to Florida. In the United States, his foreign diploma was not recognized, so he had to start from scratch. He first began as a phone customer service operator for a hosting company. During this job, he learned some valuable skills such as how to build websites, but the company was closing and he needed more options. So Luis started cleaning houses as a part-time job.

When Luis started getting more and more customers with his cleaning work, he decided to start training other cleaners and eventually opened the first branch of MyCleaningAngel in Clearwater, Florida. The business soon expanded to Tampa and then Miami – today it also operates in Now Fort Lauderdale, Fort Myers, Sarasota, and Naples areas! With currently over 50 cleaners in 7 market areas, Luis hopes to keep expanding his business to many new areas! 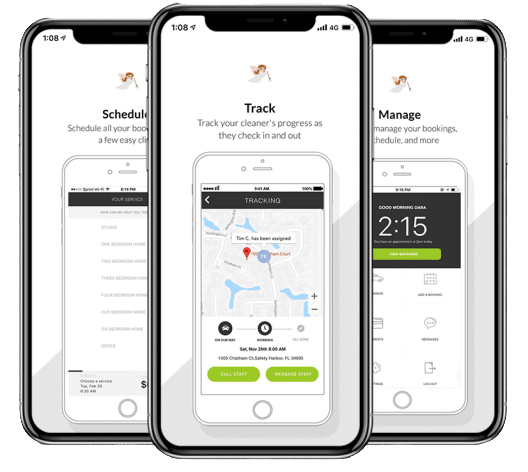 Schedule, Manage and Track your cleaning session in few click with our iPhone and Android phone app. Download is few easy steps and get the best cleaning experience of your life.